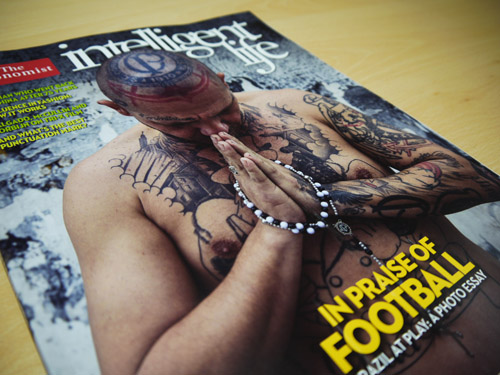 People who don’t read magazines often dismiss them as mindless gossip vehicles, confusing one sector of a very diverse market with the market as a whole. They’ve clearly never ventured to the deep end of the periodical pool – and that pool doesn’t get much deeper than Intelligent Life.

At £5.95, the Economist’s bi-monthly sister is not an impulse buy to be grabbed from the station kiosk for the ride home, along with a packet of Snack-a-Jacks and a can of Lilt Zero.

Mind you, the cover price will not be a problem to most readers, judging by the spread after spread of luxury watch and jewellery ads you have to traverse on your way to the contents pages.

But the features and columns listed there will hold most readers’ attention for way longer than a single commute. A week of return journeys might just do it, if you’re a fast reader.

It’s meaty stuff. The current issue has a tattooed football fan on the front, but instead of looking threatening, he confounds our expectations by praying. The January/February cover story was editor Tim de Lisle’s interview with Elbow frontman Guy Garvey, a thinking man’s rock star if ever there was one. It’s a great piece, recounting the band’s unusually slow rise to fame, punctuated by false starts such as landing the guest slot on David Letterman’s show only for the programme to over-run and the band’s slot to be scrapped. The interview was conducted in Garvey’s house, which de Lisle rather oddly notes is “no bigger than its neighbours” – surely that’s generally the case? It’s only de Lisle’s second invite to a musician’s home, the first being to that of “one of the more anonymous members of UB40”, and it’s clear he enjoyed it.

The September/October 2013 issue had on its front Humaira Bachal, who at the age of 13 founded a school in a squatter’s encampment on the edge of Karachi. She’s interviewed by Rahul Bhattacharya and the result is a story of courage in the face of hostility from men, including her father, who believed schooling was not for girls. It’s a fine feature and a marvellous cover, with an almost painterly quality.

I do wonder, though, whether a magazine entitled Intelligent Life should not make it a firm rule that as many covers should feature women as men. A scan of the back issues on the website, www.moreintelligentlife.com, suggests it’s a ratio of about 1:2 – better than some, but not good enough.

That’s a criticism, and here’s a tiny quibble: instead of rising to the challenge of coming up with a witty spine line for every issue – a task many editors dread, but one that can sometimes give the reader a chuckle – de Lisle doesn’t bother. Every spine just carries the lame message “The award-winning bi-monthly – also on ipad, iphone and android”.

Still, back to the good stuff: the regulars, such as style, culture, travel, food and drink, are all handled superbly, as you’d expect with writers as good as Jonathan Meades and Tim Atkin. And these sections are not afraid to be different. The travel pages, for instance, have a delectable regular spread called Cartophilia, in which an unusual map is reproduced and explained so that the reader is lured into its intricacies. Recent maps have shown London’s tunnels, Chicago’s gang territories in the Capone era, and the movements of sundry marine creatures across the Pacific Ocean (even having the Pacific in the middle, with Asia on the left and the Americas on the right, is unusual in itself, from a European perspective).

For the price of an Intelligent Life you can buy 3.6 Heats, 3.05 Grazias or 2.98 Hellos. But it’ll entertain you 10 times as much as any of those, and the thoughts it provokes will last longer still. 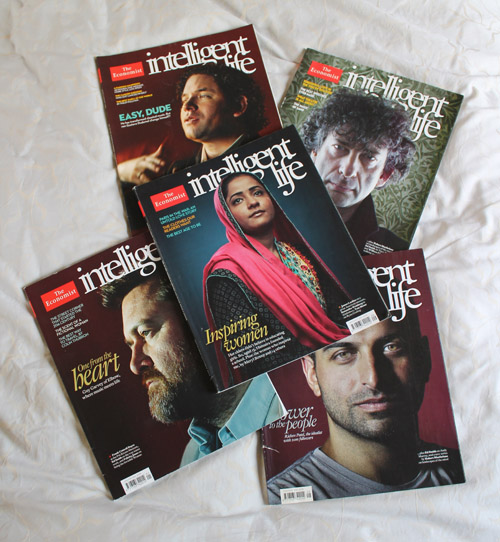